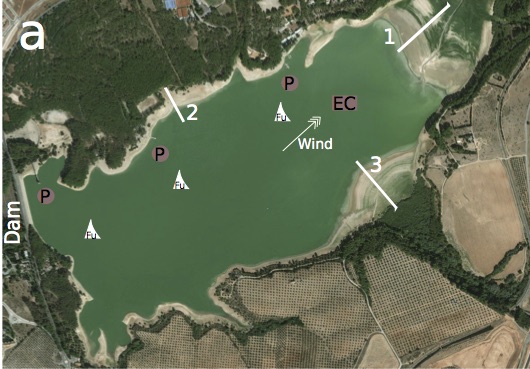 Inland waters are significant sources of greenhouse gases (GHG), including CO2, CH4 and N2O. Globally, eutrophic reservoirs appear to be significant sources of CH4, but the existing estimates of GHG emissions from reservoirs are highly uncertain. Partly because they are based on local observations collected in a limited number of reservoirs that do not represent the large variety of those systems around the world. This is the particular case of the Mediterranean biome, where, furthermore, reservoirs are the prevalent aquatic ecosystems. This astonishing lack of data on GHG fluxes from reservoirs seriously limits our confidence on the global estimates of GHG emissions. The underlying problem is that the few measurements that exist were collected mostly during daylight hours and under good weather conditions, which cannot fully resolve the true temporal variability of emissions. Mediterranean reservoirs are characterized by hydrological and thermal regimes with extreme seasonal changes leading to large fluctuations in the volume of water stored. Episodic water-level drawdowns due to seasonal changes, and reservoir management for irrigation or hydropower production induce significant increases in methane emissions, mostly through ebullition. In the Mediterranean biome, in addition, the hydrological cycle is changing as a consequence of climatic warming with increasing frequencies of extreme events such as torrential rains and severe droughts. Heavy rainfall events, and the subsequent floods that develop, are expected to bring large loads of sediments and organic carbon and nitrogen into the reservoirs that may fuel the production of GHG. In contrast, during severe droughts, the fraction of the reservoir bed with sediments directly exposed to the atmosphere increases, the water depth can be minimal and the water temperature maximal, so that GHG emissions are expected to change too. Accurate up-scaled estimates of global GHG emissions have to be based on more extensive observational data sets, including reservoirs continuously sampled to capture circadian, seasonal, synoptic, and inter-annual variability. There is an urgent need to build a mechanistic understanding GHG fluxes from reservoirs. We need to identify the physical and biogeochemical drivers that control the changes in gas emissions to formulate basin-scale mass balances of these substances, so that the few measurements existing can be interpolated in time and extrapolated to other systems, and include reservoirs in GHG inventories. Our general goal in project CRONOS is to determine the relative importance of photochemical, biological and physical processes on circadian, seasonal, synoptic and inter-annual variability in the GHG emissions in two Mediterranean reservoirs with contrasted depths and morphometries, and to propose a mechanistic model linking water and GHG budgets. We will monitor GHG fluxes using high-time resolution instrumentation such as an eddy covariance tower (CO2, CH4), funnel-shaped automated gas traps (CH4), echo-sounder (CH4), and laser-based cavity-ring down spectroscopy gas analyzer (CO2, CH4, N2O) in the water columns and in the land-water interfaces. These time-series along with time series obtained for physical and biogeochemical variables will be processed to built useful models to optimize reservoir management based on scientific knowledge.