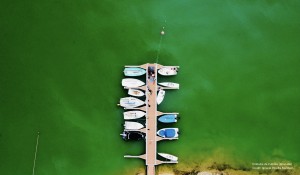 The contribution of terrestrial aquatic ecosystems to the global carbon cycle is now clearly established. Inland waters are significant sources of greenhouse gases (GHG), including CO2, CH4 and N2O. In particular, eutrophic reservoirs appear to be significant sources of CH4, but the existing estimates of GHG emissions from reservoirs and saline wetlands are highly uncertain. Partly because they are based on local observations collected in a limited number of inland waters that do not represent the large variety of those systems around the world. This is the particular case of the Mediterranean biome, where, furthermore, reservoirs and saline wetlands are the prevalent aquatic ecosystems. This astonishing lack of data on GHG fluxes from these aquatic ecosystems seriously limits our confidence on the global estimates of GHG emissions. The underlying problem is that the few measurements that exist were collected mostly during daylight hours and under good weather conditions, which cannot fully resolve the true temporal variability of emissions. In the Mediterranean biome, in addition, the hydrological cycle is changing as a consequence of climatic warming with increasing frequencies of extreme events such as torrential rains and severe droughts. We are exploring how these events are affecting the GHG fluxes in Fuente de Piedra lagoon and in eutrophic reservoirs. Most studies on the factors shaping bacterial community structure have been focused on the role of substrate availability, productivity, environmental stability and competitive, predation or parasitic interactions. Only recently, historical factors of geographical location are starting to be considered. Empirical evidences suggest a considerable role of the spatial structure on microbial community composition. This approach has an understandable influence from macroecology principles and is opening new insights into bacterial community structure studies. We have explored the role of geographical location and the long-range dispersal by atmospheric dust  mostly in alpine lakes. More recently, in the context of the FLAMENCO project we are working on the role of flamingos as dispersal vectors of prokaryotes and on the structure of microbial communities in salinity gradients (salters, marshes and brackish waters)