Blockchain is the most recent IT development in a chain of developments over the last 25 years. 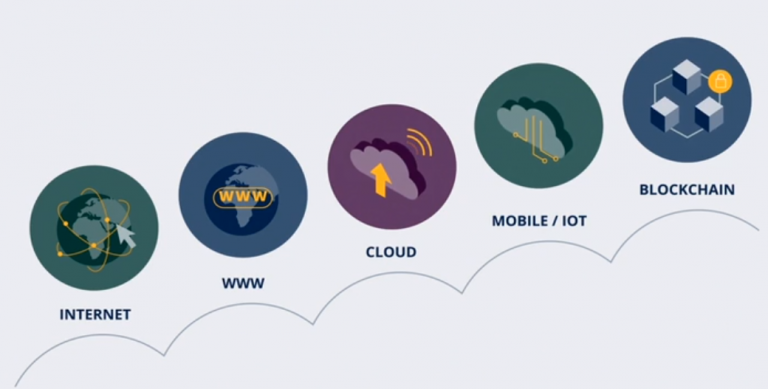 Blockchain is the use of three technologies:

that creates a secure system for digital interactions without the need for a trusted third party to facilitate digital relationships (‘trustlessness’).

In its essence, the blockchain is a change-resistant database that allows only for new information to be added to it. It’s impossible to change previously written information, without rewriting every Block once incorporated into the structure of the blockchain.  Because of this, Bitcoin transactions for example are in themselves secure (although theft of tokens, fraud and market ‘pump and dump’ manipulation have become rife.   Since the Bitcoin blockchain is publicly available, one could theoretically trace back all of the transactions to the very first transaction ever made.

There are 4 components to a Blockchain:

DLT is a protocol for building a replicated and shared electronic ledger system, collectively maintained by the participants in that system or network, rather than by one central party. In a DLT system, each network participant constitutes a ‘node’ or, more exactly, the nodes comprise the individual participants’ computers, each of which contains a complete set of transaction records (i.e. the ledger). Taken together, the nodes constitute and maintain the distributed ledger. 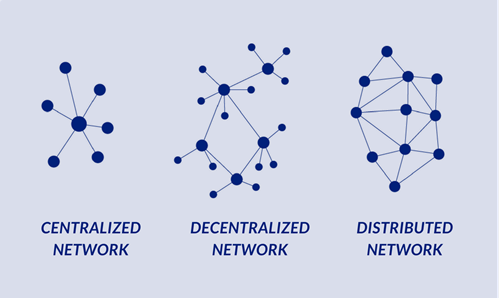 It is important to be clear about the difference between DLT and tokenisation.

There has been a huge increase in the last two years in the use of Blockchain as a method of managing climate change related projects and activities and using tokenisation capital raising for financing projects.   With the recent EU developments of the Sustainable Finance initiative and the Border Carbon Adjustment Mechanism the use of Blockchain and tokenisation looks very likely to expand even further. 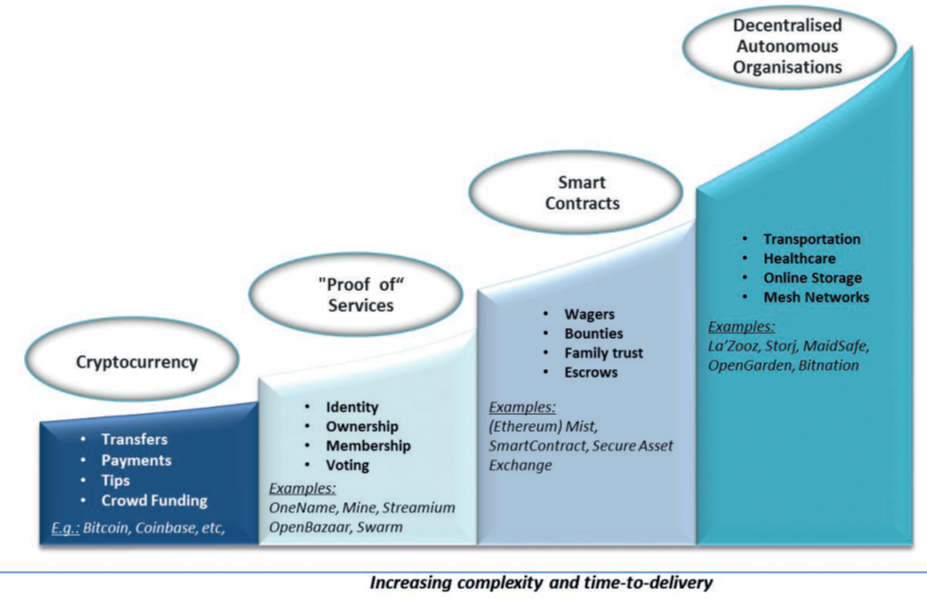 Many energy and climate related coins have already been launched. Thus, there already is the beginnings of a market in trading such tokens. Building on this emerging market, a DLT Energy and Environmental trading platform would allow any token relating to:

In July the EU committed to cutting greenhouse gas (GHG) emissions by 55% by 2030.   The Fit for 55 plan covers the following: 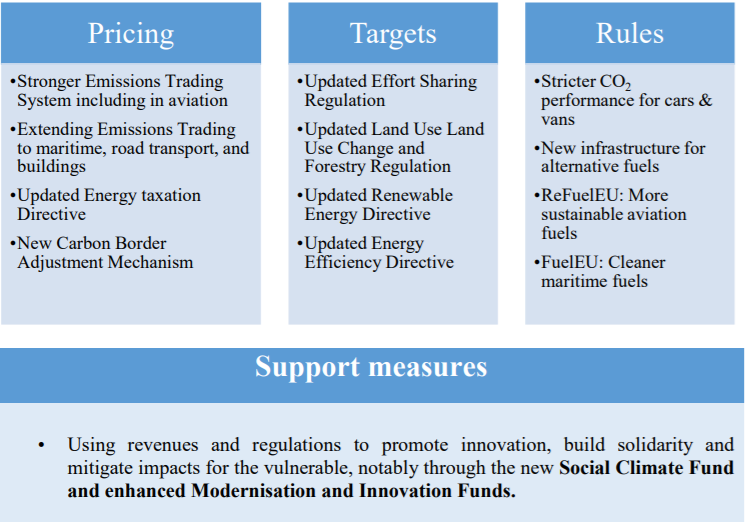 Overview of possible Blockchain case uses in the energy sector:

Cornerstones of a decentralised energy transactions and supply system: 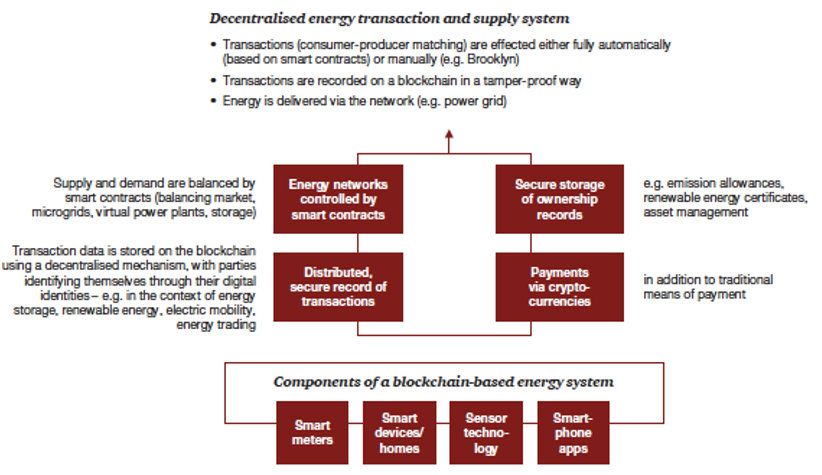 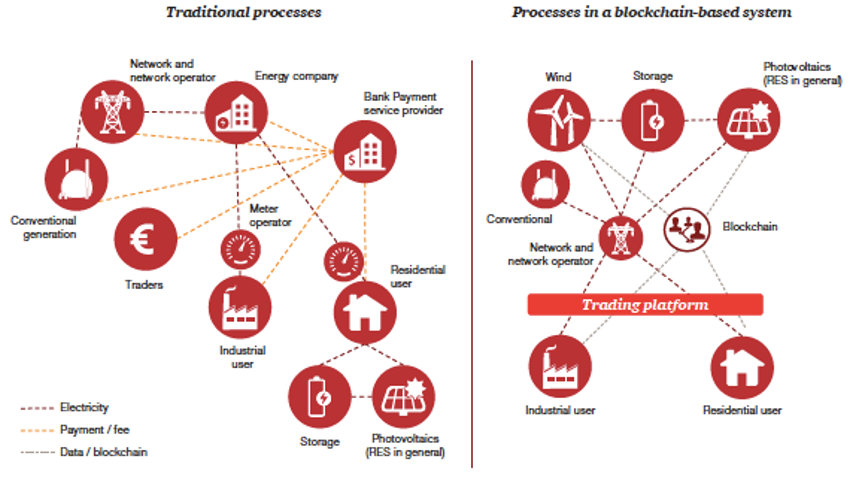 Examples of current use of Blockchain in energy & climate applications

We can consider three areas in which Blockchain is currently being used to help to combat climate change:

Electrify Marketplace was designed for the deregulation of Singapore’s energy market to provide residential, commercial and industrial consumers with P2P trading

1Planet by Carbon Futures enables individuals and organizations to support carbon offset projects. If you’re a merchant, you can leverage 1Planet to integrate offsets into your checkout process. They’re tokenizing the carbon offsets (1PL).

Cascadia Carbon is selling NFTs associated with trees that are being planted.

Corcovado is similarly selling NFTs associated with trees that are being planted. However, each NFT will also generate a fungible token (CORCOCOIN) each year after the tree is planted.

Moss.Earth has created a token (MCO2) that is tied to carbon credits resulting from the protection of the Amazon rainforest.

Pachama, though not built on a crypto foundation, are using technology to make it easier to monitor efforts to reforest and avoid deforestation, and they are playing an important role in scaling up the availability of offsets. Probably they will move to a crypto activity.

RECDeFi, a signatory to the Crypto Climate Accord, has yet to launch. It aims to create a decentralized marketplace for trading environmental commodities (carbon offsets, renewable energy credits, etc.).

Regen Network is creating a marketplace for carbon offsets tied to regenerative land management, and they’re taking a relatively decentralized approach. They’ve set up a non-profit, they’re encouraging participation from DAOs, and they’re actively working on the problem of how to create bridges between ledgers. They’ve issued Regen Network tokens via private sale and expect to sell to the public in the next few months.

UPCO2 is a token tied to REDD+ carbon credits which have been verified according to standards set by Verra. Created by the Universal Protocol Alliance and overseen by its Carbon Foundation, this token is in circulation, albeit at low volumes.

Zero Carbon Project  is trying to lower the cost of carbon-neutral energy by creating a competitive marketplace where buyers interested in carbon-neutral energy can bid on bundles of energy and carbon offsets. There’s also a token (ZCC) which energy providers have to use in order to settle contracts and which buyers earn as rewards when they make purchases. The bet is that the value of these rewards will rise, since the supply is capped and energy providers have to use them in order to participate in the network.

dClimate is creating a decentralized marketplace for climate data, forecasts, and models.  Just raised $3.5 million in a seed round.

OS-Climate similar to dClimate, are trying to create a marketplace for climate data. Though they’re using an open source framework, they’re not building on a blockchain foundation. The competition between dClimate and OS-Climate may help shed light on an interesting question that is mostly unrelated to climate — whether blockchain is ready to support info services businesses.

Blockchain for Climate Foundation is creating infrastructure to support the implementation of the Paris Agreement; specifically, the hope is to use NFTs as a tool for tracking and transferring emissions reductions at the country level.

InterWork Alliance is working to get alignment on offset standards, which — if it happens — will likely accelerate tokenization of offsets.

Open Earth Foundation describes itself as working on an open financial framework that aims to reduce friction when people want to invest in projects that combat climate change. They also are the beneficiary of a recent Beeple auction

The use of Blockchain for energy & carbon asset management and trading and tokenisation for capital raising is already well established, and we predict it will grow enormously in the energy and climate sector in the very next few years.    We will be working together with UGR Laboratorio de Ingenieria para el Desarrollo Sostenible (lids) on the use of Blockchain and cryptos for sustainable development of projects in Spain and from Spain, internationally.

Infrastructure, Innovation and the SDG (2018)